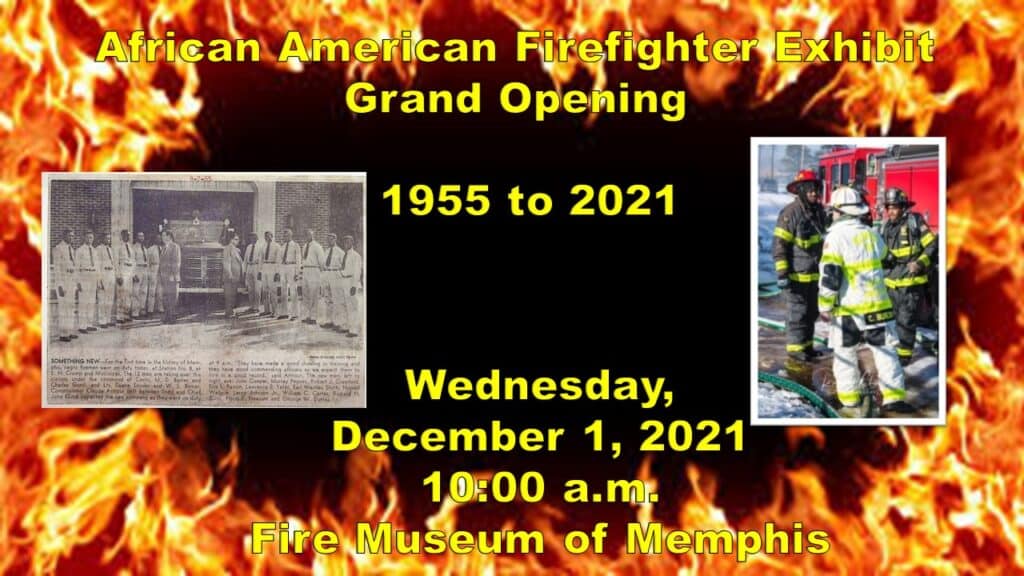 Memphis, TN – The Fire Museum of Memphis is proud to announce the unveiling of a new exhibit at the museum. The African-American Firefighter Exhibit will chronicle the history of African-American firefighters in the Memphis Fire Services from 1955 until today. The grand opening of the exhibit will be Wednesday, December 1, 2021, at 10:00 a.m. at 118 Adams Avenue, Memphis, TN 38103.

“We are so excited to be able to showcase this exhibit at the museum. It’s an important part of the history of the city,” states Kimberly Crafton, executive director for the museum. “This exhibit was made possible by sponsorships from The Pioneers Black Fire Fighters, Inc. and the Red Door Members of the Fire Museum of Memphis.”

The Pioneers Black Fire Fighters, Inc. was chartered and established in 1973. They provided a support system for African-American firefighters in Memphis. Their purpose was to deal with any problematic situations that arose in the workplace as a result of racial discrimination, such as promotions, disciplinary actions, hiring practices, and so on. Red Door Members are Memphis Fire Fighters that give to the museum out of every paycheck, much like corporations do through United Way. Their donations are used to continue to the mission of the museum to preserve the history of Memphis Fire Services.

Twelve men in 1955 made history when they became the first African-American firefighters in Memphis, Tennessee. They endured inequitable conditions and discrimination from the very beginning. They were forced to live in segregated quarters, at Fire Station No. 8 at Mississippi and Crump, until the fire department was desegregated in 1966. For many years, they suffered through both legal and institutional racism due to their status as second-class citizens.

Carl Stotts, one of the original twelve hired in 1955, filed a federal class-action racial discrimination lawsuit that resulted in a 1980 consent decree in which the Memphis Fire Department agreed to promote black firefighters in greater numbers. The Pioneers organization was with him throughout the process; they wanted to ensure that every African-American received the benefits and equal treatment to which he was entitled.

By Daniel Dover on January 13, 2023
The Fire Museum will be closed on Monday, January 16th, 2023 in observance of Martin Luther King Jr. Day.
Read more

By Daniel Dover on December 22, 2022
The museum will be closing at 2:00PM today due to significant winter weather in the forecast.
Read more